The SelectMDx test: genomic prostate cancer testing without a biopsy?

In this article, I’d like to discuss a new non-invasive test for prostate cancer that more and more of our patients are requesting. It promises to be much more accurate in highlighting the possibility of prostate cancer than a PSA test, and avoids some of the uncomfortable aspects of a prostate biopsy. It is called the SelectMDX test.

To start with, and to help new patients who are unaccustomed to the prostate cancer diagnosis process, let’s discuss the PSA blood test. This is usually the very first test that patients have that leads them down the path of diagnosis. Contrary to what you might have read in your newspaper, doctors never use the PSA (prostate specific antigen) blood test to actually diagnose prostate cancer as it is not entirely specific (to prostate cancer cancer) or sensitive (reliable in never missing a cancer). It is, however, extremely useful in identifying men who need further investigation and the largest screening study done to date (the European Randomised Screening study for Prostate Cancer or ERSPC) has shown that a man aged 55-69 years who undergoes PSA testing will have his risk of dying from prostate cancer reduced by 29%. This is important when you consider how common and important prostate cancer is: 35,000 new cases and 11,000 deaths each year in the UK.

If your PSA level is raised for your age, the test should be repeated and common causes such as a urinary infection excluded. If the test is still raised, the latest guidance from NICE (the UK’s National Institute for Clinical Excellence) as of December 2018 is that an MRI scan should be done. This can exclude some patients from further investigation but currently prostate MRI scanning is only 80% accurate for prostate cancer as other conditions, notably prostate inflammation, can look the same as cancer on the scan. If the MRI scan shows a suspicious area within the prostate (defined as a classification of PIRADS 3-5) the next step is a prostate biopsy which can be performed in a much more accurate manner thanks to the guidance from the MRI scan. In 2017 50,000 prostate biopsies were done in the UK.

One of the continuing challenges facing the urologist and the patient is knowing when to recommend and accept the offer of a prostate biopsy – the surgical procedure for removing tissues from the prostate in order to check for cancer. While a biopsy offers a definitive answer as to whether prostate cancer is present or not (remember, a PSA test is only a possible indicator of prostate cancer that can be affected by a number of benign factors like cycling) as well as its grade and stage, it is an uncomfortable procedure regardless of whether performed under local (awake) or general (asleep) anaesthetic. Naturally, many patients understandably wish to avoid this if they can.  For patients on an active surveillance programme with a slow growing cancer, they must undergo biopsies at annual intervals to keep an eye on the cancer and so the aggregate discomfort is greater still.

Current guidelines advise patients to undergo a multi-parametric MRI scan if they have a raised PSA blood test, but as previously mentioned, this test is only 80% accurate for prostate cancer and even though MRI-guided transperineal template prostate biopsy is much safer than the transrectal biopsy technique that it has largely replaced, there are still side effects:

Taking all this into account, both urologist and patient would want as much certainty that an invasive test like a biopsy is really necessary before agreeing to it. As a result, at Santis we hear from several patients every week who are keen to avoid having a biopsy and interested in alternative methods that are both more accurate than a PSA test and more convenient than a biopsy. Does this holy grail exist?

SelectMDx is a simple urine biomarker test that has an accuracy of 98% for detecting significant (Gleason 3+4 and higher) prostate cancers, outperforming other urine markers such as PCA3. It is a genomic classifier test, meaning that it tests the genes of the patient for signs of prostate cancer. Genomic classifiers can be done on blood, urine or prostate biopsy tissue that give an indication of the risk of having a cancer and, if present, its aggressiveness (i.e. does it need to be treated?) A number of genomic classifier tests exist for prostate cancer and their use is much commoner in the USA (and is funded by many of the healthcare insurers there) than in Europe, but this is changing.

SelectMDx is a urine-based test based on prostate cancer genomic biomarkers HOXC6 and DLX1, which together have a 76% sensitivity (reliability) for detecting a prostate cancer that is aggressive enough (Gleason score of 7 or greater) to require treatment. When additional risk factors (namely age, PSA, PSA density, family history and rectal examination) are added to the calculation, the accuracy of the test (negative predictive value) for excluding prostate cancer rises to 98%, with an expected total reduction of biopsies of 42%. So clearly there is much potential to avoid unnecessary prostate biopsies.

For men considering whether to have a prostate biopsy, or re-biopsy after a previously negative biopsy, it provides an accurate, safe and non-invasive method of identifying men at increased risk of harbouring an aggressive cancer, but can also be used to reassure men that a biopsy is not needed if the test shows a low reading. As a reminder, the perfect test (or ‘tumour marker’) for prostate cancer would be one that is 100% specific (is only elevated in prostate cancer) and 100% sensitive (picks up every single case). In the chart below, the relationship between specificity and sensitivity is captured by the measure AUC (Area Under the Curve) – the higher this value is, the better the specificity and sensitivity of the test is and the closer we are to this holy grail. 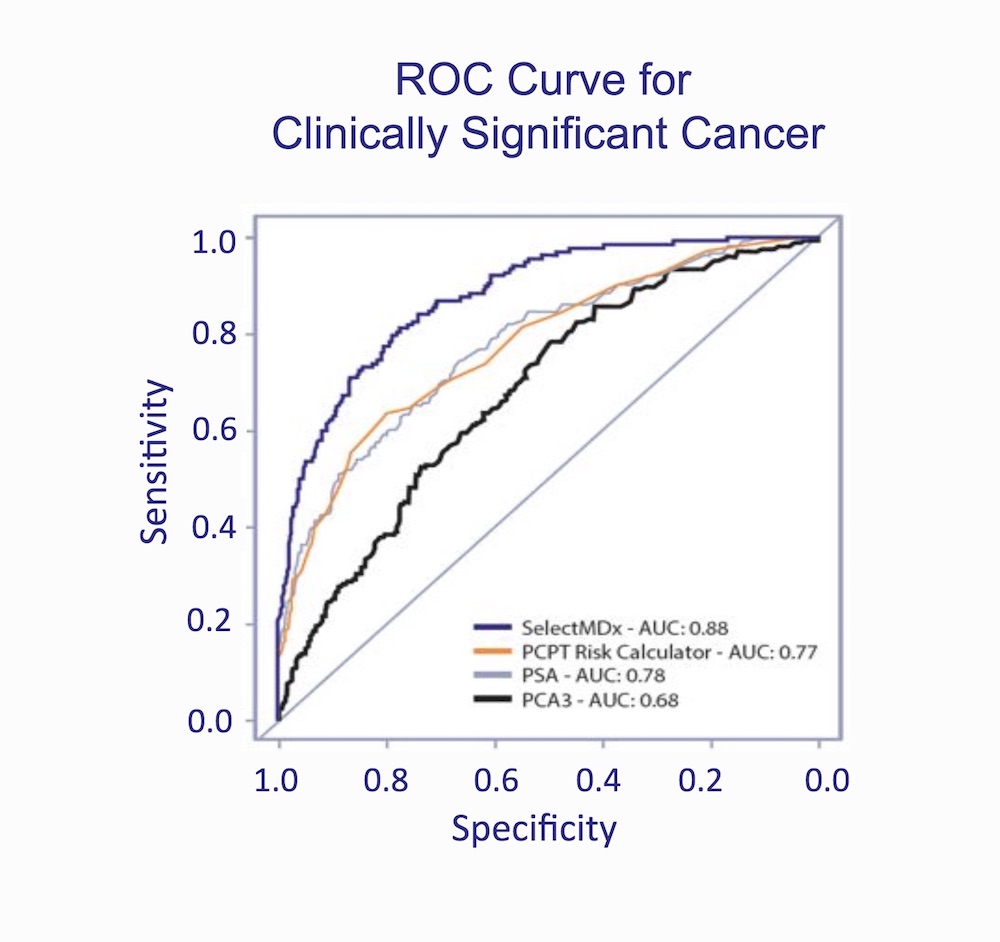 A multi-centre scientific study made in 2016 and published in European Urology confirms the accuracy of the test (download PDF here), while a 2018 study in the Journal of Urology has concluded that ‘routine use of the SelectMDx urinary biomarker panel to guide biopsy decision making improved health outcomes and lowered costs in American men at risk for prostate cancer. This strategy may optimize the value of prostate cancer risk assessment in an era of increasing financial accountability.’

Below are some example, anonymised reports for you to see how clear the test reporting is: 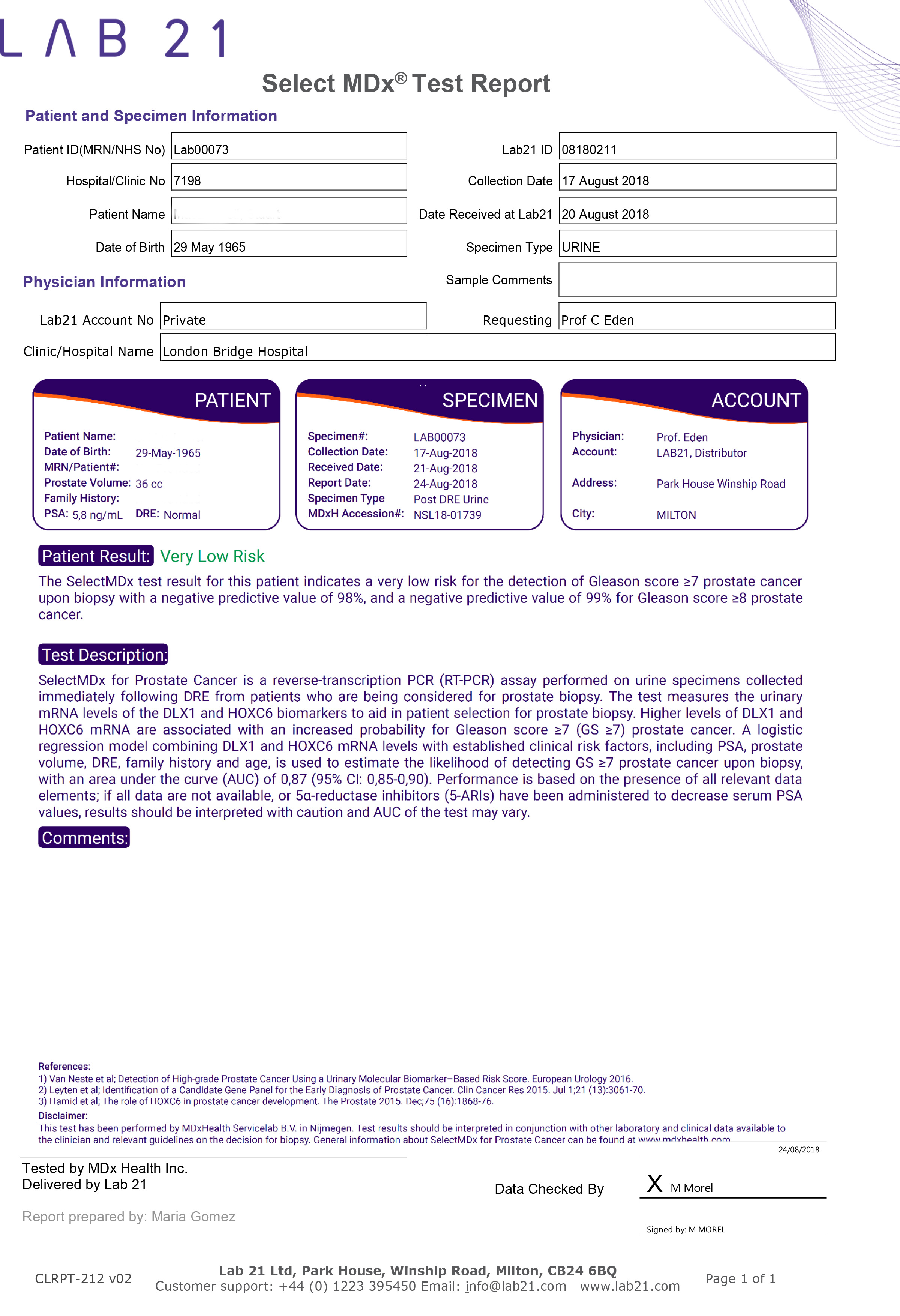 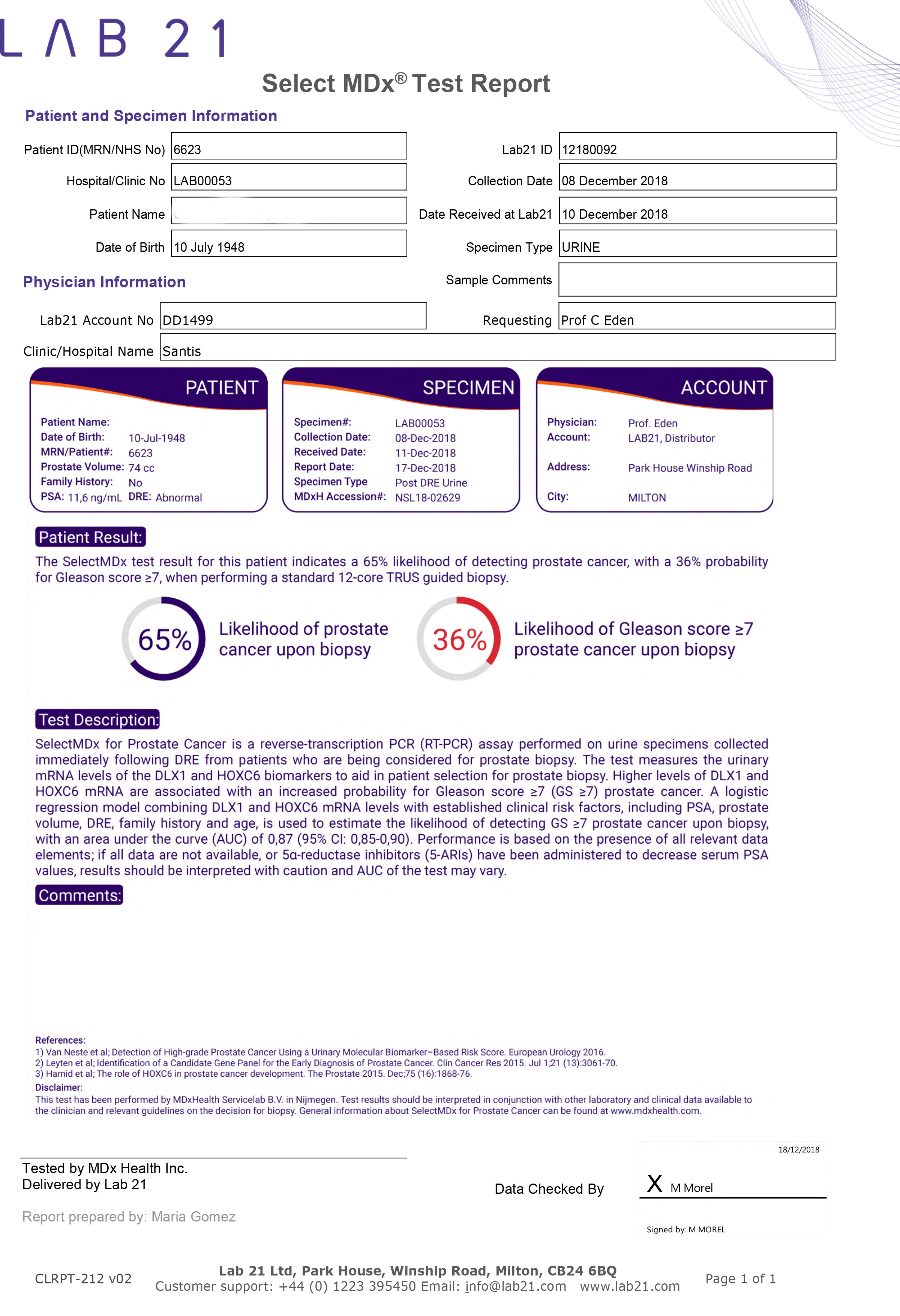 Comparisons with the 4K score test
You may be wondering what this means for the 4K score test, which recently has been the darling of advanced prostate cancer testing. It too is non-invasive, relying on blood samples being taken from the patient, and offers an overall accuracy compared to biopsy of 83%. This is marginally less accurate than SelectMDx – a good discussion of this is the head-to-head comparison by Hendricks and colleagues in 2017 of various biomarkers.

The test
The test itself consists of several components. The reason for combining these factors is that together they significantly increase the overall accuracy of the SelectMDx test.

After the urologist has done a digital rectal examination to massage the prostate and express secretions out of it, the patient passes urine into a plastic pot containing a preservative. The urine and preservative are then mixed, the patient details are completed and the protective package containing the specimen is labelled and made ready for posting to the lab. In the interests of expediency and to comply with data protection regulations, we ask patients to post their specimens at a nearby Post Office themselves.

In my opinion, the SelectMDx test represents good value for money in reducing the number of unnecessary prostate biopsies (and perhaps unnecessary prostate MRI scans). Private health insurers such as BUPA are now covering the cost of the test, and hopefully the NHS will follow suit in the future, although it does not cover the cost of the test at present. For self-pay patients, as of September 2020 the cost is £300 for self-pay patients (plus the cost of an initial consultation with a Urologist of £280) for a total of £580, but please contact us for the latest prices.

At Santis, we are pleased to offer the SelectMDx test in the UK through our Cambridge partner Lab 21: the only laboratory in the UK to offer the test. To arrange the test, please book a new consultation or a followup consultation as appropriate using our bookings system here (https://santis.carebit.co/patients/bookings/new), email or telephone us, and let us know that you would like the test.

Receiving your results
The report, which is available around 10 days after the specimen has been received, can either be emailed to you or used as the basis for a face-to-face or telephone consultation with the urologist to plan the next step, whether this will be continued PSA surveillance or to discuss the need for a prostate biopsy.

What does the future hold for SelectMDx?

Given the accuracy of the test and that we do appear to be advancing considerably towards increasingly accurate prostate cancer testing that avoids the need for a biopsy, could we think the previously unthinkable (until a few years ago) and imagine a time where a biopsy is rendered completely unnecessary? I asked my colleague Dr. Prasanna Sooriakumaran for his opinion:

“Coupled with the precise multiparametric MRI that we do here at Santis plus this highly useful genetic test, we are moving to an era of truly personalised medicine whereby prostate biopsy will become far less commonly required. Men with clear MRIs and deemed at low risk on SelectMDx will be able to avoid biopsy and only those with suspicious results will need biopsy confirmation. These techniques will also allow many men on active surveillance to avoid regular biopsy.”

So for now, the biopsy isn’t going anywhere. It is still a highly accurate test – the best we have for prostate cancer. The SelectMDx test result will provide a percentage probability of detecting cancer on biopsy (see example SelectMDx report here), but only the biopsy is definitive as it is by definition correct 100% of the time. But biomarker testing like SelectMDx is impressively accurate, and points to a future where we might not need to undergo biopsy at all. For those with low-risk prostate cancer, it’s pretty revolutionary in managing their disease.