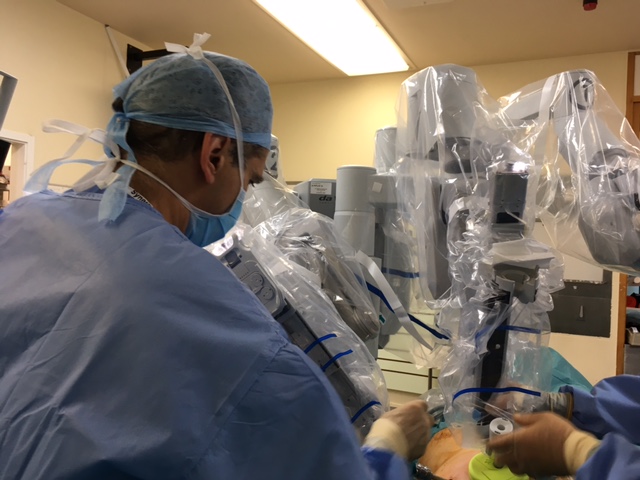 Retzius-sparing radical prostatectomy: one year on

In the year since I performed the UK’s first Retzius-sparing robotic radical prostatectomy on 4th July 2016 (see my first blog post on it entitled “An introduction to Retzius-sparing radical prostatectomy”) I have used the technique in over 120 men, gradually increasing the indications to include the technically more difficult cases: larger prostates, larger patients, patients who have previously had pelvic surgery and those who have previously had prostate surgery.

The paper describing our findings has now been published online in the Journal of Clinical Urology, and is entitled “Urinary continence four weeks following Retzius-sparing robotic radical prostatectomy: The UK experience”. For those who are interested, a video of me using the technique can be seen here. Not included in the paper is the observation that 100% of patients (40 patients) in the series were pad-free by 12 weeks. This is in comparison to my rate of 66% following conventional (non-Retzius) prostate surgery, and compares favourably to my 97.4% pad-free rate at 12 months following conventional surgery, which is already regarded as world-class – so we can confidently say the Retzius-sparing technique delivers continence earlier and at a higher rate!

In April 2017, further evidence of the dramatically better early continence following Retzius-sparing prostatectomy was provided by the publication of a randomised controlled trial (the highest level of scientific evidence in medicine) of Retzius-sparing versus non Retzius-sparing prostatectomy in 120 American men. This study was entitled “A Pragmatic Randomized Controlled Trial Examining the Impact of the Retzius-sparing Approach on Early Urinary Continence Recovery After Robot-assisted Radical Prostatectomy”. The key finding in this study was that at 1 week after catheter removal urinary continence in men who had had Retzius-sparing surgery was almost 2x as good (71% versus 48%) as in men who had not. The better results from the Santis study are likely to be due to better nerve preservation (specifically, no cautery was used on blood vessels in the nerve bundles) when using our technique.

We believe that the spectacularly better early continence seen after Retzius-sparing radical prostatectomy can be entirely explained by the anatomy of the prostate and in particular the structures that lie in the cave of Retzius. These structures are systematically dismantled in conventional prostatectomy in order to get access to the prostate but are preserved when using the Retzius-sparing approach. These structures form the walls of the cave of Retzius and are the main anchor points for the continence mechanism in men: the short and very strong ligaments that bind the prostate to the back of the pubis (the puboprostatic ligaments) and the sheets of tough, fibrous tissue (the endopelvic fascia) that cover the pelvic floor on both sides of the pelvis and converge on it from either side. 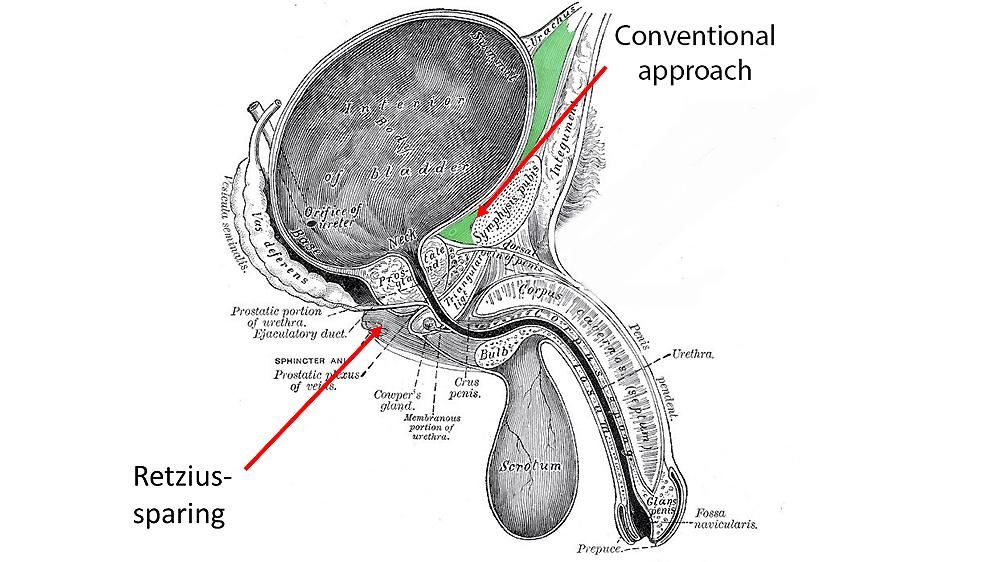 The main disadvantage of Retzius-sparing radical prostatectomy is that the workspace that the surgeon has to work in during the surgery is small and the position of the prostate and the bladder are reversed, so the anatomy at first sight is confusing. The technique of re-joining the bladder and urethra after the prostate has been removed is also different from conventional prostatectomy, in that the front aspect of the join has to be completed before the back wall, which is the reverse of the conventional procedure. The need for greater experience and expertise in keyhole prostate surgery is the largest blocker to the wider usage of the technique, which will never be suited to low-volume surgeons. In recognition of this, we are holding the world’s first Retzius-sparing radical prostatectomy course in October 2017 in collaboration with Professor Aldo Bocciardi of the Ospedale Niguarda in Milan, Italy, who invented the technique. By doing this, we hope to bring the benefits of this technique to as many men as possible in the UK by empowering capable surgeons.

In addition to improving continence, there is also a theoretical basis to expect improved potency following Retzius-sparing radical prostatectomy, because when using this approach the arteries that lie within the cave of Retzius (which contribute heavily to potency) can be preserved. Further follow-up is needed to determine whether this theoretical advantage translates into an actual advantage and we look forward to sharing more of our results on this in the future.